Sadly, I don’t have any pictures of me running track in high school. Which is probably a good thing, come to think of it.

I was the slowest runner on the track team. I felt that I didn’t deserve to consider myself a member of the track team or a runner.

But, really, you know what the slowest runner on the track team is? A runner.

And I still am.

Here’s me at the end of my very first half marathon in 2009, 20 years after being that slowest runner and 5 years ago. 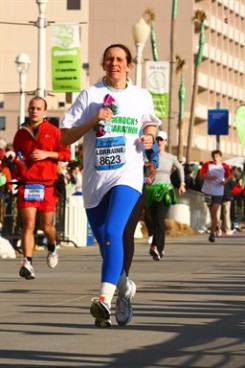 I’ll post my marathon report from Sunday’s marathon a little later today. How did it get to be Thursday already?

Well, it’s Thursday again so I’ve once again gone into the pitifully small set of old photos that are not still stashed in my brother’s basement. Here’s one of my mom at Easter in what I believe is 1998 (most of my photos are neither timestamped nor labelled, because I’ve never been organized enough for that and somehow always believed that I’d be able to look at an image and know exactly who was in it, where it was taken, and when. Yeah. I’m an archaeologist’s nightmare.). In 1998, I was still a 20-something and my mother would still send me a little basket of Easter goodies no matter where I was living. Actually, she still does. Moms are great. 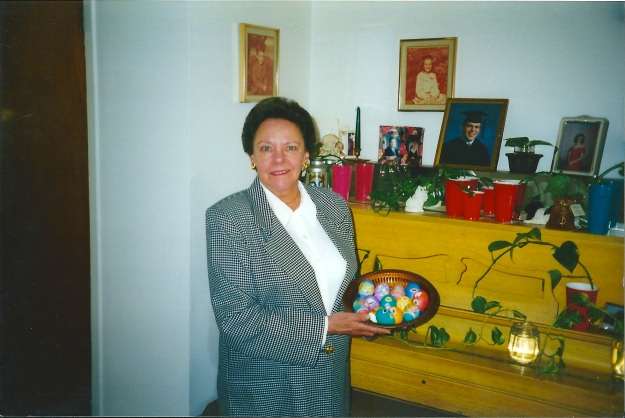 My mom, our living room, Easter 1998. I have no idea what she’s trying to grow in the red solo cups…

And as a bonus, here’s a close up of yours truly in the picture behind my mom. That’s her living room and apparently in 1998 she still had one of my Sears Portrait Studio photos from when I was 8 or so on the wall. Because she never throws anything away and probably preferred to think of me as cute little girl instead of the nutcase that was me in my twenties. 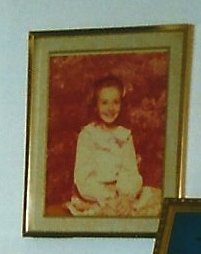 How the heck is it already Thursday again? Time, stop moving so fast, please.

Over the weekend, A(short for his real name), a person fairly close to me died. He was a boss, a mentor, and a friend. He died of an awful complication to a horrible disease and he wasn’t even fifty. His fire, his spirit, his zest for life, and his attention to detail in all aspects of his work and life marked him as special. He could make people cry easily with his brutal honesty, but rarely did so. He could use his force of personality to command the attention of a room full of people, and then use his sometimes surprising humor to set them all at ease before laying out whatever impossible, time-critical task we had to somehow finish this time. He worked hard, played hard, and found joy in life. It was much too soon to lose such a bright star. I miss him.

I have also joined an informal German class last week. Most of the members of this group are women and mothers (it meets at 10 am, what do you expect?). One of them is a 61 year old grandmother from Morocco. I had no idea she was that old until we did an exercise yesterday where we all said our ages out loud. We also learned that she married at 14, had her first child at 15, raised 7 children and now has 20 grandchildren. By most accounts, a successful life. She, however, due to the culture she was raised in, never learned to read and write. So she is now. At 61. In a second language. With joy and anticipation.

The message I am taking from these things is that:

2) But you have to start TODAY because we don’t know what’s going to happen tomorrow.

So go out and do it now. That thing that you always meant to do. It’s time. Don’t wait.

And of course, an image for TBT. This one is remotely connected to A. 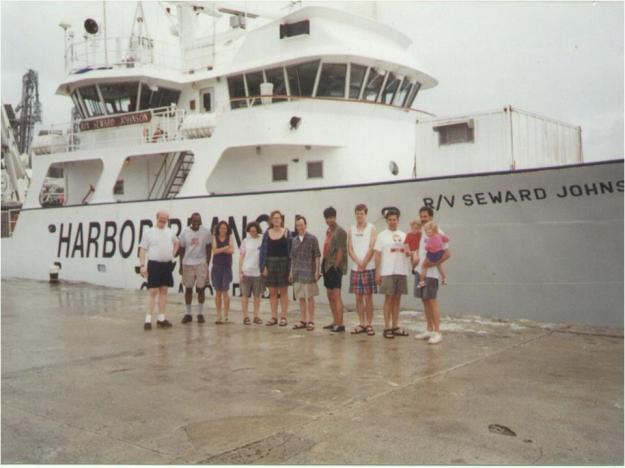 The stalwart researchers on a month-long bio-physical interactions cruise off the coast of Barbados, 1996. This is where I learned the salp joke. That’s me, 4th from the left.

It’s sort of a funny story. So, I’m not particularly good at telling jokes. I tend to drag them out too long, I don’t judge my audience well, etc. One of my favorite jokes is about hyperiid amphipods. It goes like this:
“How many hyperiid amphipods does it take to screw in a lightbulb?”

“None! They screw in salps!”

…and that’s the joke. Which only a very small subset of marine biologists even gets. So telling it to a room full of systems engineers is fairly high on the futility meter. A thought the room’s reaction (blank stares, dead silence) was so hilarious that whenever he was feeling down, he’d ask me to tell him the salp joke again, usually in front of an unsuspecting engineer, just so he could watch the reaction again. The telling got better every time. A, this one’s for you. I hope it makes you smile even now.

And it’s been more than a week for the blog, did y’all miss me?

Since it’s Thursday already (this week went by fast, apparently, that’s what deadlines and jetlag will do to you) I can just post this picture.

It’s from the spring of 1988 when I was a senior in high school, visiting my excellent friend Joeshlabotnik (who now has over 66,000 photos at his Flickr account) at college. Yes, I still have the jacket, packed in a box in my brother’s basement and waiting for the next big high school reunion. What is interesting is that I actually weigh the same now as I did in that picture (racing weight, yay) and my hair is currently as long and as unmanageable. 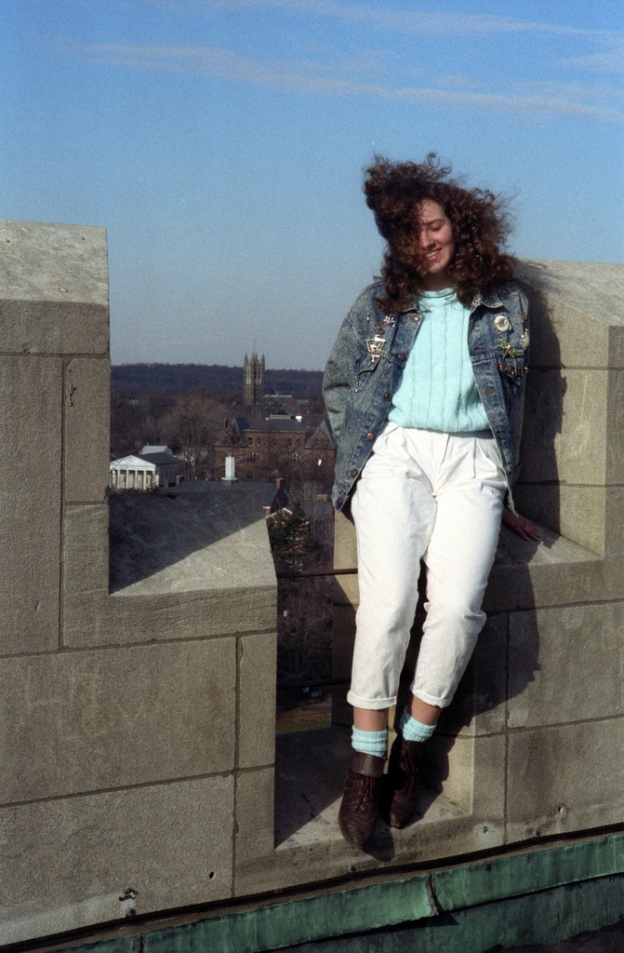 So the big questions is: should I get a haircut and how short?

in running news, I ran 170 miles in March, highest monthly total ever. And I’m feeling surprisingly uninjured these days.

Well, I missed posting yesterday, but I had a good excuse. I was in transit for 12 hours of yesterday, then went immediately to a dojo to train in martial arts, then fell into bed at a friend’s house where we had failed to set up the wifi for me (until today as I had a fairly amusing password error which prevented me from sampling the toothsome wares of the internets).

Since I’m traveling and don’t have the external drive with all my old photos on it (and the even older ones are all in a box in my brother’s basement), I can only go back to 2008 here. I swear, sometime soon I will actually make that other post I keep mentioning. But no time for that today, spring is finally here, and it’s a gorgeous day! I’ve run 13 miles in the warm sun (and given myself a sunburn in the process), was completely overwhelmed at the size and choices in the super large American supermarket, and closed a bank account at a bank in a town that I haven’t lived in for 7 years. 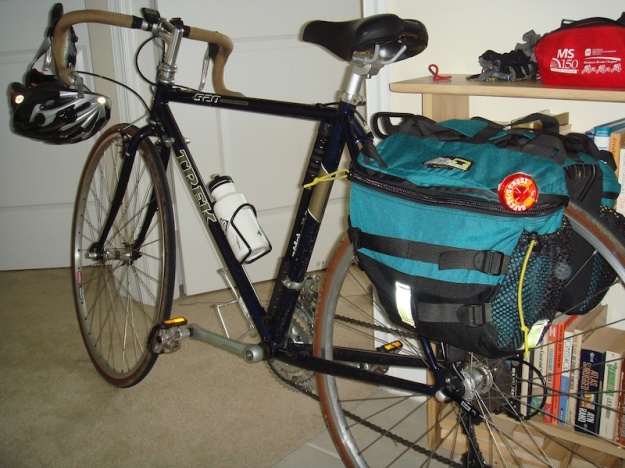 This is my touring bike. It’s a 1998 Trek 520, so the bike is a throwback, even if the photo of it is from 2008. The cute panniers are no longer being made and work for weekend trips when we stay at hotels and commuting to the office. Since coming to Germany, it has acquired much wider tires and a post office yellow set of Ortlieb panniers.

I actually bought matching bikes for myself and my then boyfriend who later became my husband. I still have the bike. Maybe that should be an advertising slogan. Trek touring bikes, made to last through multiple marriages.

And here is the cat that I had at that time, whose death paved the way for Devil Kitty and Captain Dukie. After she died (and she was a wonderful cat and I still miss her) I started fostering difficult cats for one of the local cat shelters. And eventually they sent me the boys and after I had (partially) rehabilitated them, they informed me that they weren’t leaving. 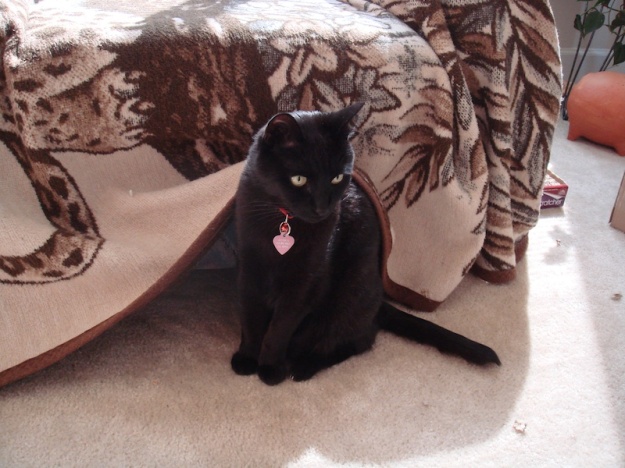 (and no, you did not miss any previous Throwback Thursdays, this is the first one I’ve ever done.)

Tweets from L on Wheels

A blog by Myriam Rees, in preparation for a Martial Arts Study trip to Tokyo

My Dreams, My Life, My Stories... Welcome

The Odd Particle [Re]View
The Disorder Of Things

For the Relentless Criticism of All Existing Conditions Since 2010

The Art and Craft of Blogging

"Let me live, love and say it well in good sentences." - Sylvia Plath

A year-long exploration of running cultures around the world

The website of Luther M. Siler, author of fictional things